A message from the Prez.

Greetings Chums. For quite a few months now you will have noticed the site has been lacking some functionality and content; most critically the loss of all video and audio clips. The site has lost so much it's simply a repository for old photographs now.

Since the site went online five years ago I have carried the cost of the site and paid to keep the domain name. When the subscription was due this year I decided I have a baby and couldn't afford the cost and let it lapse to a 'starter' account (which still costs money).

I flagged all this on the Chumments site back in May (go on, have a look...) and had hoped for a bit of discussion or positive comments. I was a bit disappointed at the lack of replies but said no more until last Chuim Club when Neil asked what the deal was about the lack of video etc on the site. I explained the situation and was a bit more heartened to hear a number of Chums, Shaggy being the foremost, offer to chip in to get the site back to its former glory and to keep it that way.

Following this discussion I said I would pass on the suggestion that was made of a whip round and if there were enough favourable responses (and offers to help with the costs) I would carry on the site for another year, if not....it's time to pull the plug.

It's decision time. If anyone is willing to stump up some money for the costs of the site could they make it known either directly  to me or on the chumments page. I'm not asking for figures just an intention to contribute.

In total it costs £108 a year - £76.11 for the site and £32.22 for the domain name . I have already forked out the latter last week as we would have lost it otherwise. It may seem a hefty total figure but remember someone has been paying it for the past five years.

If we do close the site It will NOT be viewable or archived, but deleted. It would still cost money to leave it up and I would still have to pay for the domain name. More importantly I think there is nothing so sad as seeing a 'stale' website that no one updates which daily gets further and further out of date.

So...is the site worth keeping?

Hello...you shouldn't really be here you know. This is an old test page where i tried stuff out or leave things we don't need anymore to quietly be forgotten and to die...

Download File
Its like texting...only in real time.
Choose a nickname, see whose in. Type a message and hit enter.


Rock music thuds away quietly in the background during another busy lunchtime at Carlisle’s oldest pub.

Every table was full yesterday at The Kings Head in Fisher Street as pensioners settled on benches next to students, tourists and city workers taking a break.

About half the punters were drinking real ale, which landlord Mike Vose brought back to the pub when he took over the tenancy just over a decade ago – he now sells more than 1,000 pints of it a week.

He’s passionate about his pint and can’t hide his delight at finally winning the Pub of the Year award chosen by the discerning, real ale-loving Solway Branch of CAMRA.

The Campaign for Real Ale has four times handed Mike City Pub of the Year but his eye was always fixed on the main prize.

“I’ve always wanted to win it,” he said. “I was elated when I heard. This had always had a reputation as a rough pub but not any more. We’ve got a lot of locals but Carlisle gets a lot of tourists now. Visitors see the pub from the outside and it just looks like it should serve real ale, that’s why I brought it back.”

The 42-year-old has gained a lot of respect among city drinkers for transforming the pub into one of the most appealing in the city.

Paul Chalmers from Denton Holme has been a regular there for 30 years. He sups a pint of Yates and rolls a cigarette to smoke out the back.

“I’ve been coming here since I was 16, it’s not worth thinking about how much I must have spent here over the years,” he said.

“It used to be 40p a pint when I started out and now it costs £2.48 for a pint of Yates – I measure inflation by how much my beer goes up.

“We used to be down here Friday and Saturday nights and back in on Sunday afternoons. Sometimes we were here on a week night.

“If you were working, you had money and came to see the lads.”

His smartly dressed 69-year-old mum sits across from him, sipping a brandy and lemonade and chatting about plans for her upcoming 70th birthday party. She’s among friends, many of whom will join in the celebrations.

“I can come into this pub on my own and don’t feel awkward,” she said.

The trio is completed by pal David Clague, an unemployed builder from St Nicholas Street who until last week was helping to demolish buildings on the new Sainsburys site in Caldewgate.

While not a real ale drinker, preferring instead the pasteurised Scotch Bitter made by Younger’s, he is a big fan of the city centre watering hole.

“Bikers and music lads used to sit in separate corners but it’s not a rockers’ pub at the moment, there’s a real eclectic mix,” he said. “The clientele has changed over the years especially since the smoking ban, a lot more people come in for food. But the pub still looks the same, I think the only big change is that a gaming machine replaced a mirror.

“It’s the people that keep a pub interesting. The landlord is quite an entertainer, there’s always a bit of banter. All the pub regulars are friends on Facebook. In the last few years I lost both my parents, so I came here to the pub to see my friends. It gets you out of the house.”

Different accents mingle around the bar over lunch and it soon becomes clear that about half the customers have travelled up from Leeds in the morning. They’ve taken advantage of a cheap deal on the Settle to Carlisle railway line.

Trevor Atkins, 79, from Keighley and wife Barbara are among the day trippers who found their way to the door. For the former Yorkshire Post journalist the real ale was a temptation.

“I’ve been visiting Carlisle for the last 20 years and tried lots of pubs here,” he said. “This is a good pub and the atmosphere is nice. You feel at home when you come through the door.

“I like coming up here because I did my National Service at Great Orton. We come up once a year.”

As he gets up to leave and grabs his walking stick, he tells Mike that he’d love to forget about sight seeing and stay for a few more pints... but Barbara leads him to the door.

The Kings Head is said to be on the site of the oldest known drinking spot in Carlisle. Although the existing building only dates back to the 17th century, ale is reputed to have been sold on the site since the 10th century.

In 1916, the Liquor Control Board took over in an effort to control local drunkenness.

The pub was bought by John Smiths in 1973 and until last year was owned by the Royal Bank of Scotland, who in turn sold it to Heineken who lease it to Mike.

Rural Payments Agency worker Declan Burton, 40, of Durranhill, Carlisle, is another regular. He said: “I’ve been coming to this pub for 20 years. A good pub has to have well maintained beer, that is an absolute must and the customer service must be good. A simple hello and goodbye is enough. And good food is also a must.

“This kind of pub is a dying breed. More and more you get these large chains that are factory made and all look the same.

“But this place has got character!”

Student Kieran Barker, 19, is drinking water today because he’s on duty, training as a social worker.

He’s in for lunch with support worker Laura Bell and David Smart from Aglionby Street.

“I come here quite a lot, it reminds me of the country pubs I go to at home in Kent,” he said. “To find a pub like this in a city is quite unusual.”

Times might be tough economically but Mike says he can’t believe what a busy year he’s had so far.

“I’ve had one quiet Friday since Christmas,” he said. “There seems to be more people out who are over 25, I think they’re the only ones with money at the moment.”

“If you get the simple things right, you’re in with a chance even in this climate. The secret is don’t over complicate it.”

====WELCOME TO CHUM OF THE MONTH====
This is an opportunity for us to recognise a Chum whose gone above and beyond what's expected of him; like taking a bullet for a chum (even after he realised it was the wrong woman:)), offering to swap shirts in a pub with a woman half his size, finding an excellent new boozer , or simply buying the first and last round.
As the outgoing COM I was going to say a few words about the incoming one. But after re-reading the nominations I feel it would be far better to simply reproduce what Neil said because, as I know you all agree, they are so very true.

'Shaggy by name, Shaggy by mane. Always reliable, always with a winning smile and never lets the crack get stale. Not forgetting his contribution to the wedding and to helping Maka through his ordeal'. 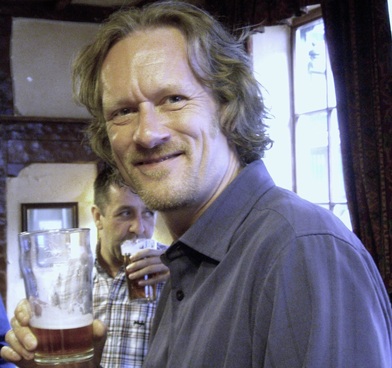 
The Prez and his ol’ lady are getting married in October - which of course means a stag-do. After many suggestions for venue (some very silly) Nottingham was chosen mostly for its rock scene and its large number very nice Ale houses.

The Chums are going away on Friday 8th October and will return on the 11th October. Plenty of time to recover.

The Best man, Ewan, has come up trumps sorting out the logistics, trains and hotels etc and was handing out information packs out last weekend. Excellent stuff mate! If you got one please keep your copy safe.

Those who weren't there for the 'democratic' vote It was decided that on the Friday we leave we will have a slap up fry-up at Woodies and get the 11:31am train. There's a break at Manchester for 'lunch' then the plan is to get into Nottingham for tea time.

AN ODD NUMBER OF CHUMS MEANS ALL GOING WILL BE ASKED TO HELP OUT WITH THE COST OF THE SINGLE ROOM AT PRESENT WITH 11 GOING IT WOULD BE £5.78p EACH EXTRA.


Ewan has bought the tickets and the hotel rooms. He has also pointed out that there is less than five weeks to go...

Below are some details.
Hot Babes of the Day
Powered by